The former sand quarry at Gentissart, located between the villages of Tilly and Mellery, was acquired in 1996 by the Province of Walloon Brabant with a view to creating a teaching and biological interest site.
The use of sand from below the level of the phreatic layer gave rise to several lakes totalling nearly 7 hectares free from any pollution. In addition to these lakes, this site with an area of 26 hectares is made up of varied environments (wild land, embankments, sandy areas, words, etc).

Thanks to a Management Committee composed of 19 members most of whom are scientists (biologists, geologists, botanists, etc), the inventories made to date on the site at Gentissart have allowed its biodiversity and biological potential to be highlighted.

The public and schools can visit, by arrangement only, to discover and watch nature.
Moreover, an observation post is accessible from outside (rue de Gentissart) to allow everyone to discover the water birds among other things.
These, like the insects and amphibians, benefit from privileged habitat at Gentissart.The vegetation is also a particularly interesting diversity since it hosts hundreds of species. Given the ecologically scientific value of this sand quarry, it was awarded the title Site Natura 2000.
GPS: 50.568942,4.562073 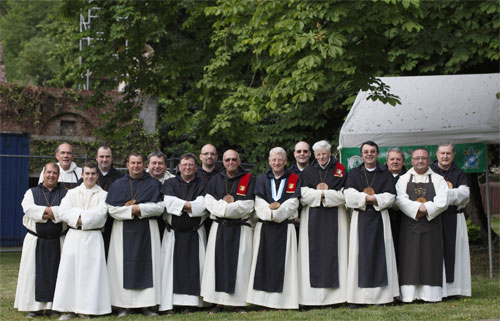 The brotherhood of monks Hostieux of Villers-la-Ville

The brotherhood of monks Hostieux of Villers-la-Ville The Brotherhood was officially born December 7, 1995 after being recognized by the Council of Noble Brabant and Brussels (consisting of 14 fraternities...

The Brotherhood of Vineyard Abbey Villers

Breakfast Quebec June 28, 2015 Villers-la-Ville (Belgium)    Every year since 2010, the Villers-la-Ville initiative union organizes a day entitled "Quebec" with typical breakfast of lumberjack by way home and...